Hi, I'm Quincy, a very shy girl, born April 20, 1998. June 1999 ago my life changed dramatically when my daddy moved out, leaving me with mummy and her daughter Kelly. Since then no more shouting at me, no more names calling a.s.o. But my mummy had to cry a lot and my house was no longer a home. I was given up for adoption, don't know what that means but that's what I overheard. On August 15th 1999 something weird happened, my mummy made a phone call and as a result of that a strange

I was so scared, I'm always scared, that I tried to hide myself and make myself invisible. There was some talkin' about 'I'll take her home with me until she finds a new home.' And more about 'I can't keep her, I already have three dogs.'

Then the woman took me to her place, one block away. Boy, four of my breed jumped on me and I had to pee on the floor. To my surprise no one shouted at me, they cleaned up after me and that was that. Actually the people in the house didn't seem to notice me at all, they all went on doing what they were doing, leaving me to become friends with the dogs first. Pebbles told me she was the Alpha, o.k. if that's what you think. Tommy said it was alright to live in his house as long as I left him alone and Bobby and Tiffany were my friends right away. Bobby left a couple of days later, he only had been staying here for a while. All this made me very tired so I had to take a nap.

Later that evening Bobby and I were taken for a walk, by my new mummy (she wasn't going to be but now she is) and it was great fun. It felt so good that, I think for the first time in my life, I actually wagged my tail outside. That is .... until we came closer to what used to be my home. My tail dropped instantly, I made myself very small but we just passed the house, nothing was said except 'come on, let's go home'.

Home??? what did she mean? But we went back to her place, my friends were waiting there and that was such a relief I started wagging my tail again. It was a bit scary to say hello to the humans, but again nothing happened. 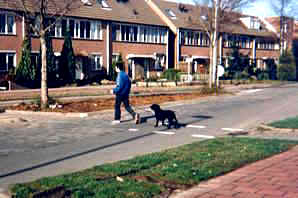 Shortly after that I was told to go into my crate and the whole family went for some sleep, leaving me with Bobby in the crate next to me. Still wondering what had happened to me and what was in store for me I fell asleep.

The next morning at 6.30 Bobby woke up and announced this by barking. Immediately mummy came running down, zipping her jeans. She was so pleased to see me that I couldn't do anything else but wag my tail like an idiot and jump like a fool.
Bobby and I went for a walk and again it was great fun, as long as we stayed on the safe side of the street. Again we passed my former home and I showed her that I'm a very smart girl by finding the way to my new home.
What I learned next was that they serve a real breakfast here, a bowl filled with kibble in stead of just a piece of bread. I didn't know exactly what a breakfast was, so I took some bites and left most of it for my dinner. Two minutes later my bowl was gone, mummy took it away, sh.. that wasn't what I meant.
I did better the next morning, leaving nothing but an empty bowl. I think it was this day that I heard the first rumors about 'keeping her' and 'where three eat, four can eat'. My new daddy said that he couldn't stand the thought of handing over my leash to another owner since I seemed so happy here. And, he said, he had some rights too and wanted me to stay, so I stayed! Yippieeeeeeeee!

- I have friends around me all day they leave me alone or play with me.

- I get two real meals a day and lots of goodies if I am a good girl.

- I'm beginning to learn what a good girl is, the words didn't mean a thing to me in the beginning.

- To my surprise male human beings can and do speak friendly to me and hug me.

- There's toys everywhere, a basket full of them and I can take what I want.

I still have to learn that:

- mummy has no drivers license so she walks a lot, always taking one or two dogs her. She wouldn't know where to leave her hands without a leash in it, she says.

- Going to town, means a one hour walk to get there and one to get back.

- Although I'm terrified to see all those people passing by (heaven knows what 's going to happen to me) mummy's there and she will look after me, without being overprotective.

- Leaving home means that we do come back. I am part of the family now and where they go I go. (I'm still afraid to believe this is for good).

The date is now October 3 and I'm still here. Quite a few things have happened since my last entry in this diary.
The most important thing is that I jump and lie on the couches and beds too. They seem to like that very much and - as they say - I have a real will to please. I must admit that it really feels good to rest my head against their feet or legs. To reward them for this I bark like hell if strangers approach our house, which they do not appreciate enough! Mummy tells me to shut up, but I can't stop, afraid as I am that they're coming to take me away. 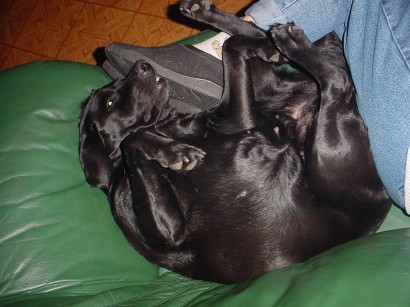 Normal routine outings still are great fun, but I do not like going to the mall, in fact any walk outside this routine is reason for me to panic. I'm still afraid of other people, kids and so on. Not of other dogs, I like dogs, problem is just that there's always a human being on the other end of the leash. I need the leash 'cause mummy doesn't know what I'll do if I freak out.